The Homecoming of Our Lady of La Naval 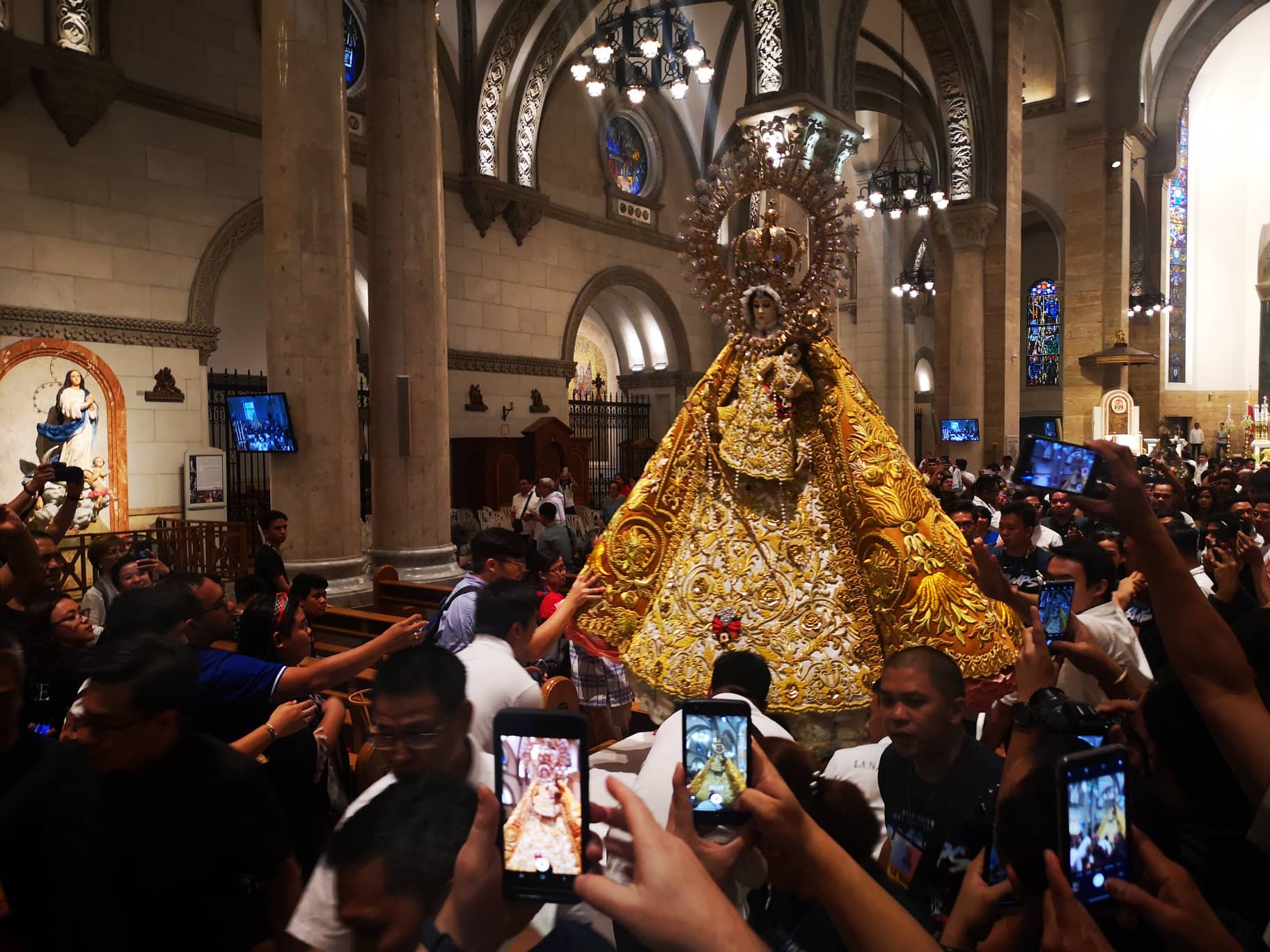 The recessional of Our Lady of La Naval.

Cries of the throngs of the faithful resounded at the Plaza Roma today, rising above the gloomy weather that threatened to dampen spirits and moods.

But they were not having any of that.

With much fervor and conviction, the people of Intramuros - from the surrounding educational institutions, the government offices, banks, and other organizations - showed their excitement as the the vehicle carrying the original image of Our Lady of the Most Holy Rosary of La Naval de Manila rolled in front of the Manila Cathedral, with solemnity and majesty befitting one of the most historical figures in the country.

The crowd broke into applause; in the background and at the hems of the multitudes, tourists of all races checked to see the seeming phenomenon unfolding in front of their eyes.

Our Lady of La Naval has finally returned home.

After sixty seven long years, the Lady has returned to her original home - the Old City - where she once drew devotees in at her place in the old Santo Domingo Church (which is now situated in Quezon City). It truly is of historical value and everyone knew it and wanted to be part of it.

Colegio de San Juan de Letrán, in partnership with the Intramuros Administration, sought to bring forth the Lady’s return, as part of its Quadricentennial Celebration happening by the end of the year.

His Eminence Luis Antonio Cardinal Tagle, the outgoing Archbishop of Manila, graced the celebration by officiating the Holy Mass held as welcome to the Lady.

In his homily, Tagle discussed praying - or being prayerful - and how he hoped that everyone will be taught by the Blessed Mary to pray.

The La Naval Grand Procession went after the mass, with each carroza featuring Dominican saints and saints that are related to Letran. The carrozas were sponsored by alumni, organizations, and recognized institutions. They are: the Learn Alumni Association; Atty. Reginaldo and Teresa Open;  Arturo Ty and family; Justice Michael Frederick Musngi; Michael Plana; Mapua University; Evelyn and Raul Castro and family; Orlando Ilacad; the Learn Grupo de Fil Chinos; Letran HS Batch 1985; Manuel V. Pangilinan (Smart/PLDT); and the senate president of the Republic of the Philippines, Sen. Vicente Sotto III.

Gracing the event also are the prior provincial of the Dominican Province of the Philippines, Very Rev. Napoleon Sipalay, Jr., OP, and Hon. Francisco Moreno Domagoso, the mayor of Manila.

The La Naval festivities will continue on tonight, with the Marian Vigil and the Best Manto, which is a Dominican practice that venerates Our Lady of La Naval. Tomorrow, January 25, will be the send-off Eucharistic Celebration to be officiated by the rector and president of Colegio de San Juan de Learn Manila and Bataan, Rev. Fr. Clarence Victor Marquez, OP, SThD.